Watkinsville is the largest town and county seat of Oconee County, Georgia, United States. As of the 2010 census, the town had a total population of 2,832. It served as the seat of Clarke County until 1872 when the county seat of that county was moved to Athens, a move which ultimately led to the creation of Oconee County in 1875. It is included in the Athens-Clarke County, Georgia Metropolitan Statistical Area. 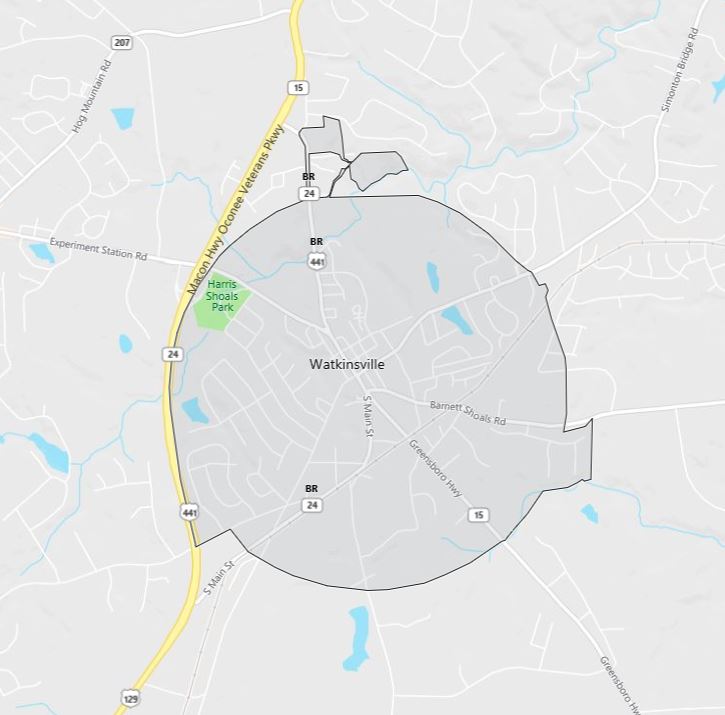 In 1802, Watkinsville, originally known as the “Big Springs” community, was named after Colonel Robert Watkins of Augusta, a lawyer and early compiler of “A Digest of the Laws of the State of Georgia” through 1799. Watkinsville was a small village located on the dangerous western frontier of the new United States between Creek and Cherokee territories. Eagle Tavern, believed to stand on the site of the old Fort Edward, opened in 1801 and today serves as a museum commemorating the era of wagon and stagecoach travel.

Watkinsville first appeared in Clarke County records in 1791, only 58 years after James Edward Oglethorpe founded the colony of Georgia.  In 1802, John Cobb gave up 8 lots of his plantation to create the city. it then became the county seat for Clarke County and remained so until 1872, when Athens took over that role. The locals were not happy and voted to create a new county, named after the Oconee River on its eastern border, and Watkinsville became its seat on February 25, 1875.

Until the late 1970s, Oconee County remained primarily an agricultural county with Watkinsville standing somewhat still in time.  Due to a few early subdivisions being built, though agriculture still played a very important role, the county soon became known as a bedroom community of Athens. During the years and positive economic conditions that followed, the population of Oconee County increased dramatically. With this increase came the demand for shopping centers and all the associated amenities that soon follow a growing population.

During this same time, the City of Watkinsville experienced some population growth, but its downtown changed little. Having primarily a traditional, though historic, downtown business area, it found itself unable to compete with large shopping complexes. Consequently, the downtown area remained basically unchanged and not overly striking in its appearance.  It wasn’t until the early 1990’s that Watkinsville found and redefined its self.  With the success of the Oconee Cultural Arts Foundation (located on School Street) and the influx of local artists to the area, as well as the opening of two fine restaurants, the City started to see its true potential.

Watkinsville applied for and received a Transportation Enhancement Project grant and reworked and beautified its downtown business area, adding brick sidewalks, planters, simulated antique lamp posts, benches, new curbing, and much-needed landscaping. Ashford Manor, one of the best bed and breakfasts in the region, opened in the historic Ashford home on South Main Street. Ashford Manor hosts “Concerts on the Lawn” during the spring, summer and fall months and other gala events that bring many people into our city.

Town Center, which has since become the anchor of our downtown business area, was constructed and has enjoyed great success, by bringing numerous specialty shops and restaurants into Watkinsville. Town Center was the idea of Mike Thornton, a local resident, who caught a glimpse of what could be and then made it happen. “Chappelle Gallery,” owned by Kathy and Jerry Chappelle and known nationally for their fine pottery art and numerous shows opened on South Main Street in the historic Haygood House.

Girasoles (Spanish for Sunflowers) Restaurant took a chance on Watkinsville. Jose Zambrano, the owner, and chef, truly serves some of the best food and wine found anywhere, has helped to put Watkinsville on the map. Chops and Hops and Mirko’s are two other fine restaurants which have opened in Watkinsville and, through their excellent food and drink, have only added to the ambiance that we call Watkinsville, the Artland of Georgia.

Proud of Our Community

The City is proud of its heritage and what it has accomplished. Over the last twenty years, it has re-invented itself into a desired location in which to live, do business and visit. We are a Tree City, a Bird Sanctuary, a Mecca for the arts, we experience a practically nonexistent crime rate, and we continue to plan for the future.

Cooperation between local governments and local organizations, the ideas and pride of its residents and a common desire for good is what has brought Watkinsville to its present level and though we, like most towns and cities, are experiencing difficult economic times, we fully intend to see Watkinsville and Oconee County continue to improve and prosper.