City With A Vision

Duluth is recognized as a model city for Gwinnett County. It is poised with a perfect blend of small businesses, entrepreneurial enterprise, major corporations, and visionary developers. Its success rate has been obtainable through sound economic efforts, business advocacy and leadership development. The vitality of Duluth is no accident. It is the result of careful planning and great foresight on the part of its business and community leaders. From tangible communication programs to local events that influence and impact the business environment, Duluth embraces a unique, concentrated form of government.

As the second largest city in Gwinnett County, Duluth is noted first in financial stability throughout the State of Georgia. As a result, there are no bond ratings, and the City basks debt free. This, in addition to Duluth’s favorable growth pattern, has earned it the reputation of a suburban oasis, making it a very desirable address, particularly at the start of a new millennium.

Duluth remains a busy hub today, continuing in the vanguard of the Metro area’s great business and residential expansion. Despite phenomenal growth, it has retained its small-town character, where personal camaraderie, spirited by annual holiday and festive events, is savored. Duluth is home to more than 26,688 residents who live, work and play in its 9.8 square-mile community. Its commercial corridor is among Gwinnett County’s busiest. Over 1,750 businesses are located within the City limits.

The corporate sector of Duluth welcomes over 1,750 businesses to the city, and by all indications, this number is likely to continue in growth.

Duluth is the first city in Georgia to implement multi-material curbside recycling. This program is free to all residents and was recently upgraded to include cardboard recycling and special waste, such as oil and paint.

The tourist attraction is strong in Duluth. The Southeastern Railway Museum preserves, restores and operates historic railway equipment. The Duluth Fall Festival, held the last weekend in September, offers more than 250 arts and crafts and food booths, and draws crowds greater than 80,000.

Duluth elected the first woman mayor in Georgia, Alice H. Strickland. She lived 1861-1947. She promised to “Clean up Duluth and rid it of demon rum.” Her contributions to the community included opening up her home for kids to have their tonsils removed (there were no hospitals at this time). She also lead the movement to protect forest lands and donated an acre of land for a  community forest, the first in the area. Her home has been designated as a historic location by the Georgia Historical Society.

The Methodist church was the first church to form in Duluth in 1871. The church was formed when a small group of citizens began meeting at the home of Mr. and Mrs. Singleton S. Howell. The first building was constructed in 1873.

The Baptist church was organized in February 1886 and the first building built the same year. In 1907, a second building was built and was destroyed by fire in July 1947. The building was rebuilt in 1948 of brick, rock, and Stone Mountain granite.

Duluth is the fourth oldest chartered City in Gwinnett County. Lawrenceville being the oldest following by Norcross and Buford.

The Bank of Duluth was the first bank to organize and open in 1904. It was located in the building currently occupied by Economy Pharmacy in Downtown Duluth. The Farmers and Merchants Bank opened in 1911. Both closed during the Depression. The Bank of Duluth was re-organized in 1945 in the original building.

Gwinnett’s first hospital was built in 1943 in Duluth – Joan Glancy Hospital. Glancy Jones Dunn was the first baby born at Joan Glancy Hospital. The hospital was funded by General A.R. Glancy after the death of Olin Burnett, 6, in 1941. his daughter, a Duluth cow farmer, and employer of the boy’s father wrote to him about a small clinic to serve the people of Duluth’s medical needs. He sent $500 to get things started and sent $250 every year after. The hospital was named after the General’s daughter, Joan, who died of pneumonia. 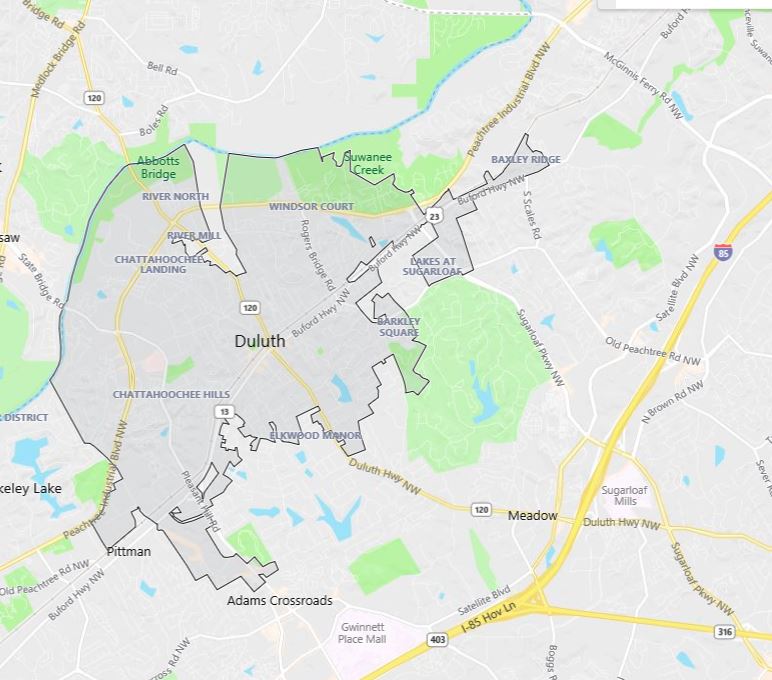